Chouyu is a minor character in the Chūka Ichiban! series. As Meirie's father he is the vice chef of Yosen Sake House where he manages everything there and is master of Liu. Chouyu is also a special acupuncturist and the best in Guangzhou.

Headwear covers the top of his head yet Chouyu has long wavy black hair that reaches to his shoulders.

He also wears a matching orange colored top and baggy pants reaching his shins, stopping at his black boots. Over his shirt he wears a long open, long sleeved dark jacket with the length reaching his thighs.

He rarely reveals his emotions and comes across as stern. He is described as arrogant when he expresses his view that a cooking challenge will be easy.

Chouyu is remembered by Mao before meeting him in chicken town where he praises him on his growth.

When Mao and Shell are giving their farewells to one another, Chouyo appears to tell everyone that time is up and for them to get back to work.

He has prepared a huge ice sculpture of a dragon and concentrates on the fine detailing to complete it.

Joining both Mao and Wei Li, he makes his way to a ruined fort having received an invitation himself.

He is a father figure to Liu and is the one who taught him the fundamentals of knife work and heat control.

After taking part in a cooking contest in his past, he comes across this literally masked chef again. 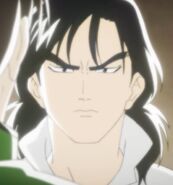 Add a photo to this gallery

Retrieved from "https://chuka-ichiban.fandom.com/wiki/Chouyu?oldid=910"
Community content is available under CC-BY-SA unless otherwise noted.