Their motto is "controlling people through cooking". They wish to control China's culinary world and the members currently looking for the Legendary Utensils.

Kaiyu, Alkan, Jochi, Ensei & Mira are the five strongest and most fearsome chef on the Dark side. They are known as The Five Tiger Stars.

The emblem is called Black Cloud Kirin. It is usually tattooed somewhere on the members body. There are also members that wears the emblem on their clothing. 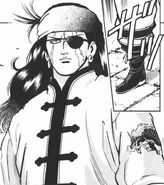 Retrieved from "https://chuka-ichiban.fandom.com/wiki/Cooking_Underworld?oldid=895"
Community content is available under CC-BY-SA unless otherwise noted.